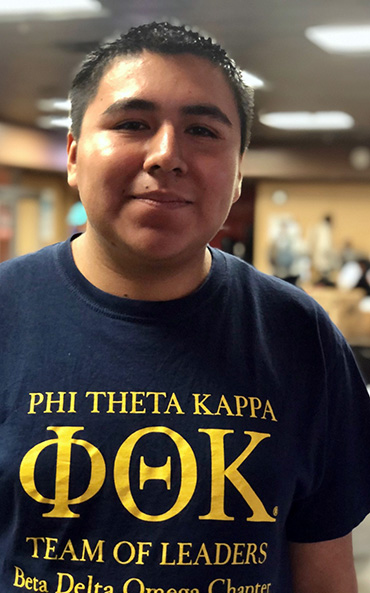 Distinguished Chapter Officers are selected based on the recipients' demonstration of leadership, promotion of Honors in Action and other engagement in the Society, and enthusiasm for the Society's Hallmarks. The MSJC Beta Delta Omega Chapter of PTK nominated Baranda, the chapter's Leadership Officer, for the award in January based on his service during 2020.

In an effort to better assist the MSJC chapter, Baranda launched a workshop to educate his peers on how to properly submit themselves for PTK Scholarships, PTK EDGE, and PTK Connect with the support of the chapter officers and advisors.

Baranda and 30 other PTK officers received the PTK Distinguished Chapter Officer Award on April 11 at the PTK Catalyst International Convention.

The Hemet resident also serves as the Regional Southeast District Vice President for the Nevada/California Region of Phi Theta Kappa (PTK). Baranda, a first-generation college student, hopes to transfer to Vanderbilt University in Nashville, Tennessee, and major in Human and Organizational Development for Fall 2021.

He was also selected as a 2021 Coca-Cola Academic Team Silver Scholar, earning him a scholarship. Selection as a Coca-Cola Silver Scholar was based on scores the student earned in the All-USA Academic Team competition, for which more than 2,000 applications were received this year. This program is sponsored by the Coca-Cola Scholars Foundation and is administered by Phi Theta Kappa Honor Society.